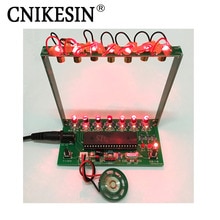 The frequency of the human ear can be heard from 20Hz to 20kHz, and the harp note frequency should be in
this range. Just different notes have their own fixed frequencies. Through the 52 microcontroller comes with
16 bit timer, you can produce the above audio. For example, the harp’s standard tone, La, is 440Hz. By
calculation, the half period is 1136 Mu s. Thus, the square wave of the 440Hz can be generated as long as the
jump pin level is changed in the half cycle. And then through the electroacoustic conversion element (horn),
you can produce standard tone La, and other notes are the same way.